Fumaça Waterfall among the highest waterfalls in Brazil, the first accessible in a single day hike 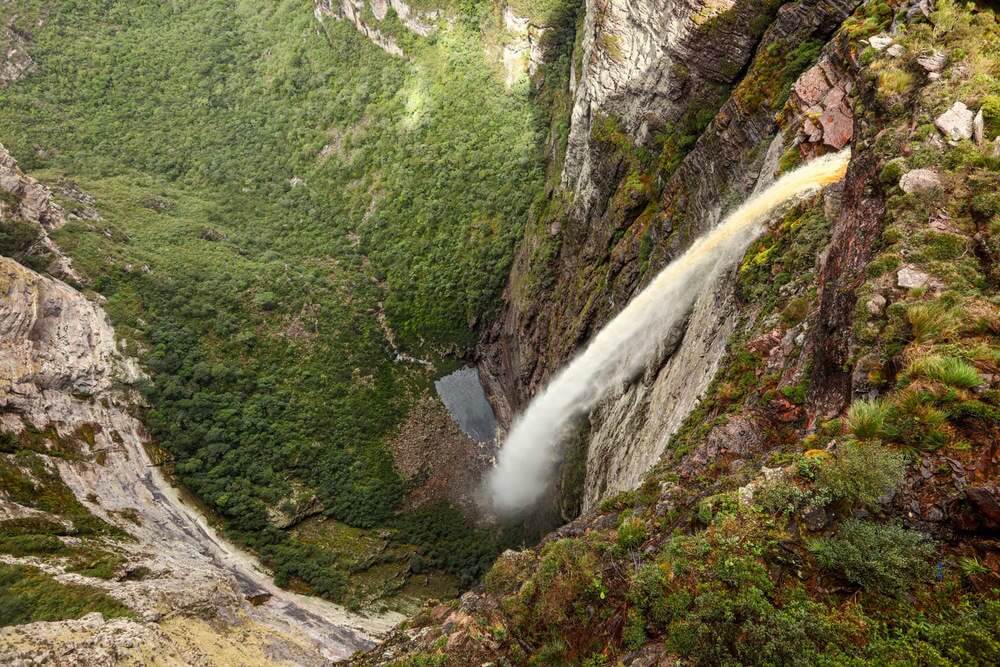 Many doubts hang over which is the highest waterfall in Brazil. This is due, in large part, to the difficulty in accessing giant waterfalls. As few people have been in these places, it is difficult to prove and guarantee exactly which is the waterfall that can take the title of highest of the country. But at one point, most researchers in the area agree: accessible in just a single day hike, Cachoeira da Fumaça, in Chapada Diamantina National Park, takes the title of highest with better access!

The issue of the highest waterfall in Brazil revolves around El Dorado, the massive waterfall with a large volume of water and an unique fall located at Serra do Aracá, in the state of Amazonas, in the tepuis of the western Amazon and near Monte Roraima and Pico da Neblina. This giant waterfall is registered with 353m height and accessible only on a wild expedition of 10 days, with 6 days by boat and 4 days of trekking in dense and closed rainforest. Those who have already been there said that the spectacle is indescribable, the volume of water is really intense, the surroundings of untouched Amazon forest and the abyss spiked in the high mountains complete the magic of the lost treasure.

El Dorado recently lost its number 1 position when researchers discovered a giant waterfall in the Serra dos Órgãos National Park, in the highlands of Rio de Janeiro state. The 10 days expedition, with high technical level of mountaineering, revealed the Neblina Waterfall. The discovery, by the group of scholars during research on the region’s water basin, records that the waterfall is more than 450m high! But to get there, only with the experience of high-performance athletes and mountaineers.

According to the updated ranking of the highest waterfalls in Brazil, the Giant Waterfalls Project, two other waterfalls located in Monte Roraima / RR are larger than El Dorado and smaller than the Neblina. The north and south waterfalls of the Cotingo River are 375m and 365m high respectively. But besides being less famous, they also have very difficult access and complex logistics. Then we get to our beloved Fumaça Waterfall in the Chapada Diamantina National Park! That does not hide from the visitors who wish to know its beauty and the dance in the walls of the canyons that embraces it. Its 340m of free fall offers true spectacles in the different seasons of the year, either with a high volume of water (after the rains) or when its volume is just a fillet, that vaporizes through the valley before reaching the bottom, creating the famous curtain of Smoke – and that´s the translate name: Smoke Waterfall!

The hike to Fumaça Waterfall can therefore be considered the most accessible among the giant waterfalls in Brazil. Reached in just a single day hiking, a 12km (round trip) to reach the top and enjoy the abyss and the panoramic view of the mountains. Other trails can also be carried out around the Fumaça Waterfall, such as the Lençois walk through the river bed to the well, or the exit through the Capão Valley towards Lençois, a wild trekking of 36km, carried out in 3 days. Make sure you know the highest waterfall with the best access in Brazil! Come to Chapada Diamantina and enjoy many other amazing waterfalls in the National Park!